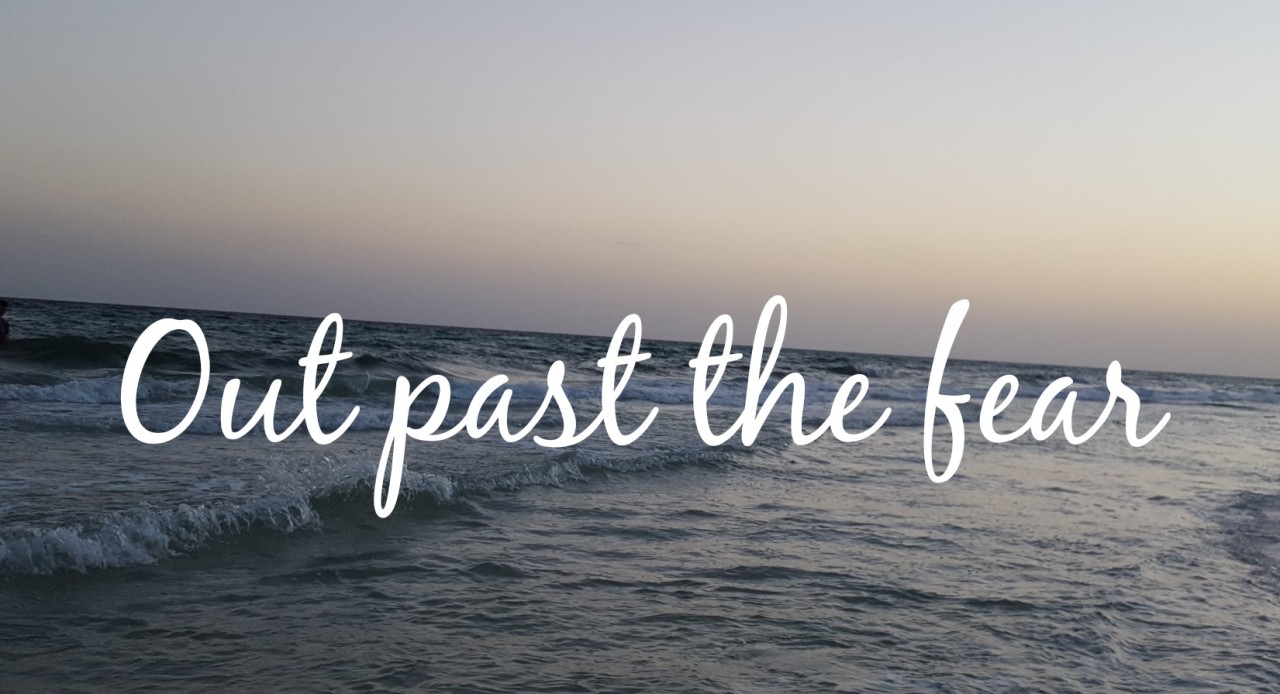 Caeley said she wanted to swim out to the sand bar, so without hesitation I said I wanted to go, too. We walked along the beach to a place that wasn’t crowded, but decided that swimming out into the deep without other people around to scare away and/or distract sharks and rays was a bad plan.

We walked back into the crowd and found a spot to begin our swim out to the sand bar. She had been out the day before and it was covered with live sand dollars. I’d never seen them alive so I wanted to experience it for myself. It seemed like a fun adventure.

Between the shore and the sand bar was a stretch of deep water. We pushed our way past the waves in the shallows and started swimming when we could no longer touch bottom. As I swam I had a thought, a revelation, if you will:

I can’t touch the bottom.

Like, it’s not an option. If I get tired that’s too bad. Oh, and remember that video on Facebook last week of those sharks that were really close to shore? And those people who got stuck in the undertow? Yeah…what were you thinking?!

As near as I could tell I was about halfway to the sand bar. It was the same distance in either direction to a place I could put my feet down. I nearly panicked because I did not think this through at all and the distance looked much shorter when I was standing on the beach. Also, I’m not much of a swimmer and I’m out of shape.

I wondered if the two or three Barre classes I had taken would help. Ha.

Caeley said if I got tired I could just float on my back to rest. I decided to keep pushing on and breathed in a very controlled way so as to stave off the very real panic that was trying to take over.

I talked to God about my hope to survive as I swam. I floated/paddled on my back a good bit and eventually we made it out to the bar. It took a while to find a place we could touch because though it appeared shallow, it wasn’t. The water was just really clear.

Once we did, though, it was really fun to be out there. We could see lots of brown sand dollars strewn around. Caeley had a pair of goggles so we took turns diving down to look around. I haven’t just enjoyed playing and swimming in the ocean that way in years.

As a mom I’m usually busy playing lifeguard, but it was good for my soul to sort of feel like a kid again.

We stayed out til we had our fill and as we swam back in I was feeling like this was a spiritual experience. I couldn’t put my finger on it, but I felt like God was near and I needed to learn something.

It was much easier getting back to shore because we had the incoming waves on our side. I floated on my back and paddled most of the way in and thought about how sometimes we just need to go with the flow, and let ourselves be carried.

Getting back to dry ground left me with a sense of relief and accomplishment – I didn’t drown and I got to spend some quality time with Caeley.

That was a couple of weeks ago. This morning I ran across an update from Audrey Assad. She’s one of my favorite Christian artists – her music is deep and thoughtful and moving.

She’s working on a new album, which I’m excited to hear. Her story is that these new songs were born out of a hard season, in which she was confronted with doubts and uncertainty, and her faith was shaken.

She shared a screenshot of some lyrics and as I read them, my mind immediately went back to my swim in the deep waters, and the fear I fought on the way.

This is my story, not just of an ocean swim, but of my life the last few years. In the wilderness, though dry and lonely, I’ve found water, friendship with God and kinship with Jesus.

There is no death here in the ruins.

Diving headlong into my fears, sadness, questions, and even anger, I found Him. If I had turned back, where would I be?

If we push past our fear of uncertainty and choose to face our doubts, they really can turn into wonder. It’s happening for me.

I’ve been saying for a few years now that we can’t be afraid of our questions. We need to ask them, we need to ask God, we need to step out where our feet can’t touch down and trust Him to carry us.

There’s adventure and wonder and life on the other side, though, if we keep going. Sometimes we swim, sometimes we just try to stay afloat, sometimes we get carried effortlessly.

Trust Him with your heart – the joy, the pain, the grief, the anger. Dive out into the deep and go on an adventure with Him.

Out past the fear, doubt becomes wonder.

**FYI, Audrey Assad’s album will be called Evergreen and it will be out in the Spring of next year.