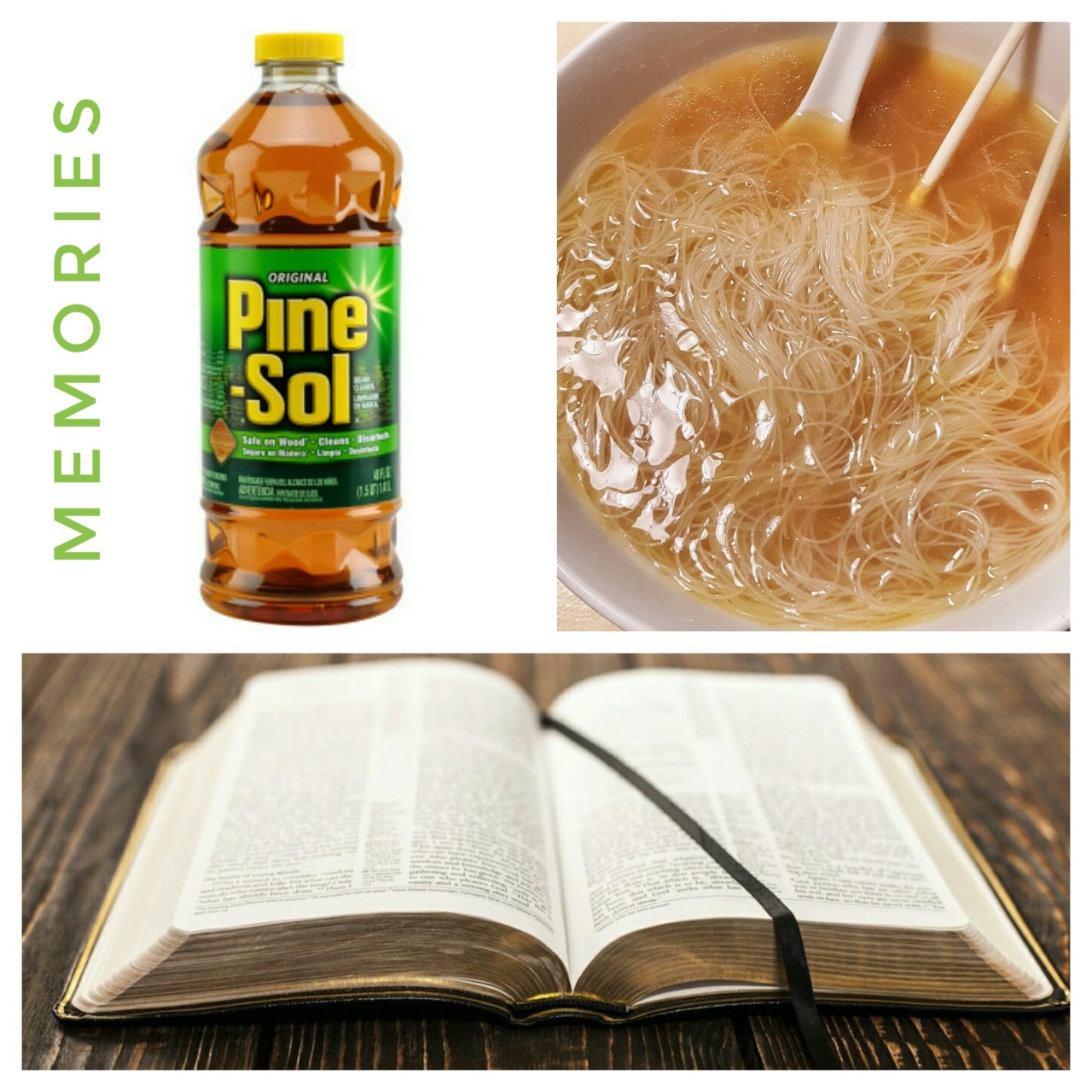 A few days ago, Caeley and I went to eat ramen in Westport. I love ramen so why would I settle for a fifteen cent bowl of it from Walmart when I can pay eight dollars for fancy ramen? Right? (It was good, FYI, and I’d totally go back for more.)

While there I went into the bathroom and the smell of Pine Sol blended with generic “old” hit me upside the head and took me straight back to one summer during the mid-80’s. It smelled like Harvest Temple and grape Kool-aid.

Both of my parents worked so I was going to a day camp at a church near our house for the summer. The smell of the bathroom took my mind back to that church – back to playing four square in the parking lot, a tornado warning we had one day, drinking Kool-aid and being chased by a cute boy wearing cutoff jean shorts. It’s astounding to me the way our senses get tied up with our memories.

The other thing that came back to me was something the lady in charge of the day camp told us one day. We must have had some sort of chapel or devotional thing as part of our daily activities, because what I remember most is that she told us – a bunch of kids! – that the world would end in the year 2000. Jesus was coming back and that was it. It was a fact.

She had it all figured out. I can’t remember whether I was freaked out or not. Probably not, because when you’re 9 years old in 1984, the year 2000 feels like forever away. It obviously didn’t impact me too deeply because by the year 2000 all I was aware of was the potential chaos of Y2K – another disaster that didn’t happen.

I understand now that she was probably a dispensationalist, pre-millennial, young earth, follower of the Millennial Day Theory, reading things like The Late Great Planet Earth, by Hal Lindsey. She was expecting a rapture of all believers to happen in 2000.

This is an error people have been making throughout history. Since Jesus ascended to heaven people have claimed various dates and times that the world will “end,” and they have been proven wrong. The Millennial Day Theory is still floating around out there and it continually gets modified when things keep not happening on schedule.

I recently read where one well known pastor says Jesus claimed to be “Lord of the Sabbath,” but He didn’t really mean the Sabbath day of the week. Of course not. He really meant that the Sabbath was the last 1,000 years of time and he wanted us to know He is Lord over that. The pastor was building a case for the aforementioned teaching that I received as a child – that the end of the age is now.

However, a simple and plain reading of all three times it’s told to us in the Gospels that Jesus is Lord of the Sabbath, makes it clear that He, indeed, meant the actual Sabbath. And the greater point Jesus was making was that the Pharisees were focused on the letter of the Law not the spirit of the Law. They were missing mercy in favor of rules. They were missing who Jesus was. It had nothing at all to do with time, the end of the age or a thousand year period.

I grew up hearing these kinds of things and I didn’t know any better than to just nod my head and believe it. Many of us did. But, I’m not a child anymore and the responsibility to learn and seek truth is on me now.

Many of my beliefs have changed, regarding eschatology, and I can tell you I don’t think I have everything figured out. There are a lot of voices out there claiming many different things, and that should give us pause.

If most of what we believe doesn’t come from our study of Scripture, or if we haven’t even tried to see if what we are hearing is Biblical at all, we might have a problem.

If my primary source of wisdom is a pastor who proof-texts and ignores context, I need to be careful. I think many teachers are banking on us not opening our Bibles to check what they’re saying, or maybe they don’t even realize what they’re doing, themselves. After all, only so much can be squeezed into a 25 minute sermon.

Often when one questions a teaching, she is told she just needs to get a revelation – the Word is living and active, after all. It can’t be locked down to just one interpretation, right?

Sometimes there are deeper meanings to what is being said in the Bible, but most things are straightforward (or they were at the time they were written). If a person wants to make a case for a particular belief, it can often be done without twisting things around. I never understand why people go that route.
There are many ideas and agendas being pushed around, and one could probably find a Bible verse to back up any one of them. There are Bible promises being claimed left and right. There are ways of life being defended. There are products to sell and there’s money to be made off your fears – and your hopes, for that matter.

If we don’t do our part to discover what the whole counsel of Scripture says, we will believe anything.

Context must be king. We don’t allow people’s words to be misconstrued like that in any other area of life. There is no other book I can think of that is so sliced and diced. In our world a misquote could land you in a lawsuit, in some cases. At minimum it can cause a lot of pain or trouble.

I’ve always thought of it like this. If I was sitting in a restaurant with my daughter on her 16th birthday, I might say, “I’m buying you a new car!” (this wouldn’t actually happen, but let’s pretend). What if the person at the table next to me attempted to make a claim that I promised to buy her a new car? She tells everyone she knows that this wonderful lady from the restaurant said she was buying her a car.

She would be right. I did say that, verbatim. BUT I WASN’T TALKING TO HER.

When the car doesn’t show up in her driveway she ought not be mad at me. Context matters.

I recently told some friends that I was taking a break from listening to most outside voices and theologians.

I’ve grown tired of all the conflicting voices and trying to wade through it all. “Prophetic” voices on one side say all hell is about to break loose and they’ve had a vision, or a dream, which proves it. And they have some products to sell you. On the other side are the prophets saying all is well. Things are getting better. And they also have had a vision, which proves their side.

Still others have all our questions about God figured out. He’s a pacifist. He’s a God of just war. God gives us free will. There’s no such thing as free will. He always wants to heal people if you can muster up enough faith. He doesn’t ever intervene in our lives. He knows all things. He knows all things that are knowable. He is sovereign. He is sovereign but limited. Donald Trump is a gift from God. Donald Trump is a judgment on America.

I’m done with that for now. One danger is that we become distracted from the simplicity of the gospel, which is more than just that you’re awful and need saving. It’s that there is a new king – Jesus. He has begun establishing a kingdom, now, and we are to participate in bringing it to earth. Not by being in charge, but by laying our lives down, by teaching people how to follow in His steps, by demonstrating love and forgiveness, among other things.

We are his representatives, we carry His spirit, we are not slaves to death and fear. We are not to be looking to discern the exact timing of things, seeking some deeper Gnostic knowledge, but rather to be busy doing what we’re called and made to do – bear His image in increasing measure right where we are.

I just want to know HIM. The more I see who He is through the lens of Scripture, the more I love Him. What I keep discovering is that He is bigger and better than I thought.

I’m reading a book by Jen Wilkin, and she says it well:

The heart cannot love what the mind does not know.

Transformation comes by changing our minds, which in turn changes our hearts. That’s why it really matters what we put into our minds.

One of my practices for this year is to re-focus my attention away from various theologians and thinkers – which is really hard for me, because I love theology and have learned so much from others – and turn it to direct study of the Bible itself.

What does it say? Who does God reveal Himself to be? How do the pieces fit together? What did He actually say and what was the context?

Yeah, I’ll have to wade through Leviticus. And Revelation – which, by the way, was ultimately intended to give hope to the original readers, but has been used to scare the pants off people.

We have a great privilege in that we can own our own copies and read for ourselves. People died to make that possible. People risk their lives just to have a Bible in some parts of the world.

Every part of the Book matters.

It all weaves together into something beautiful that actually does make sense.

And all of this rambling from a whiff of Pine Sol. Who knew?